The North Carolina Equity in Special Education: Disproportionality website is designed as a resource to inform and guide local education agencies (LEAs) as they address disproportionality in their school(s).

LEAs and Stakeholders are encouraged to utilize the resources much like a menu, choosing the sections as they apply to their interests and needs. 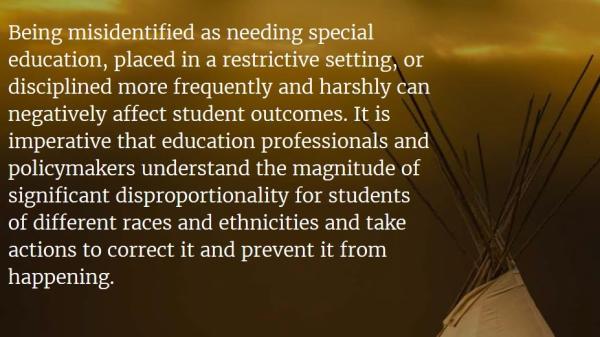 Disproportionality is one measure of educational equity. It occurs when students from a racial/ethnic group are identified for special education, placed in more restrictive settings, or disciplined at markedly higher rates than their peers. The federal government considers disproportionality “significant” when the overrepresentation exceeds a threshold defined by each state.

Inappropriately identifying students for special education has short-term and long-term negative impacts, especially on students of color. Consequences include missed opportunities to be exposed to a rigorous curriculum, lower expectations, and fewer opportunities for successful transitions to postsecondary education. Social consequences of inappropriate disability identification include students' loss of self-esteem, exposure to greater stigma, and more racial separation in classrooms.

Impacts of Placement in Restrictive Settings

Placing students in segregated environments exacerbates achievement gaps, as researchers have found that "students in general education classrooms have better academic and employment outcomes than students placed in separate spaces" (National Center for Learning Disabilities, 2020). Studies have shown that students with disabilities taught in inclusive settings were much more likely to graduate on time and be employed. Students who are educated in segregated settings may be exposed more often to educational environments with fewer resources, resulting in missed opportunities and, ultimately, poor outcomes for those students. For example, students in segregated schools may be excluded from extracurricular activities or lack access to graduation imperative courses.

Disparities in discipline by race/ethnicity are unfair, and there is evidence that they can have traumatic consequences lasting a lifetime. In addition, "there is no evidence suggesting that removing children from school instead of teaching pro-social skills and addressing the behavior at the moment actually improves behavior. Further, students who are suspended or expelled are more likely to be held back, drop out, or enter the juvenile justice system when compared to their peers".