Every Student Succeeds Act Approved in December 2015
The Every Student Succeeds Act (ESSA) is the latest reauthorization of the 1965 Elementary and Secondary Education Act (ESEA) and was approved by the U.S. Congress and signed into law in December 2015. ESSA reauthorizes the nation’s national education law and longstanding commitment to equal opportunity for all students and replaces the No Child Left Behind Act of 2001.

The U.S. Department has approved North Carolina’s plan under the Every Student Succeeds Act (ESSA).

The N.C. Department of Public Instruction today resubmitted the state's application for funding under the federal Every Student Succeeds Act (ESSA). The revised version reflects additional changes requested by the U.S. Department of Education after the department submitted its first revision in February.

Federal reviewers requested a few adjustments in the state's plan for measuring high school performance and a more detailed examination of how the teaching force is distributed among schools across the state to better ensure equity for all students.

Revised State Plan for the ESSA with Tracked Changes (submitted on May 23, 2018)

Read the response letter from the U.S. Department of Education for the specific items in the state’s plan requiring additional information or revision.

Also included with the response are peer-review feedback on the technical, educational and overall quality of the state plan:

Revised State Plan for the ESSA with Tracked Changes (submitted on February 9, 2018)

Text of the Every Student Succeeds Act (ESSA) of 2015 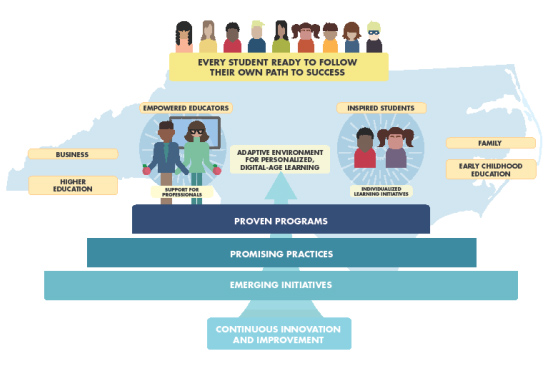 General Draft Timeline
On December 1, 2016, the North Carolina State Board of Education (SBE) voted unanimously to submit the Consolidated State Plan by the September 18, 2017, submission date. Therefore, the timeline below reflects the extended timeline for development of the plan.

Letter from Governor Cooper to the SBE Chairman and State Superintendent (August 18, 2017)

Notice is hereby given that the North Carolina Department of Public Instruction (NCDPI) will submit a request for waiver of section 34 C.F.R §200.6(c)(2) as it requires State Education Agencies to adhere to a 1.0 percent cap for the total number of students assessed Statewide in a subject area using an alternate assessment. Specifically, the state anticipates that it will exceed the cap under paragraph (c)(2) with respect to any subject for which assessments are administered under §200.2(a)(1) in any school year, and is requesting, pursuant to 34 C.F.R §200.6(c)(4), that the Secretary waive the cap for the relevant subject for one year.