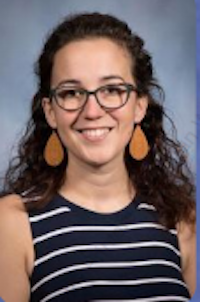 Rachel O’Kelley arrived at John A. Holmes High School today like any other; ready to teach several science courses in the small school in Edenton in rural northeastern North Carolina. The day will end for her like no other.

During a school-wide assembly, called ostensibly for a visit by State Superintendent Mark Johnson to tell students and teachers about the state’s new “Say Something” anonymous school-safety reporting system, O’Kelley got the surprise of a lifetime.

She left the assembly with a check for $25,000 to spend as she pleases – the prize that comes with being North Carolina’s Milken Educator Award recipient for 2019-20. O’Kelley is one of just 40 educators nationwide to win the honor from the Milken Family Foundation, which annually recognizes exceptional early-to-mid career education professionals.

In congratulating O’Kelley, Johnson called attention to her passion for teaching and commitment to students.

“Like so many of her peers, she cares deeply for her students and holds them to high expectations,” Johnson said. “She personalizes instruction and engages parents. Rachel also is a leader in her school and district, helping to support new teachers and actively participating in district initiatives aimed at improving learning for all students.

“Her students are fortunate to have her, and so is North Carolina.”

Greg Gallagher, Milken Educator Awards Senior Program Director Greg Gallagher, presented O’Kelley with the award and praised her for her efforts to engage and challenge her students.

"Rachel O'Kelley goes the extra mile to make sure all of her students get the kind of science education that will be so vital in the years ahead," Gallagher said. "She knows firsthand what Stephen Hawking was talking about when he said, 'Science is not only a discipline of reason but also one of romance and passion.' O'Kelley is clearly passing along her verve for science to the next generation, and it's one of the many reasons we're proud to welcome her as a Milken Educator."

“As a graduate of the high school she teaches in, she knows our students, their families, and our community,” Jackson said. “She believes herself to be a fellow learner along with the students and her fellow teachers and has earned the respect and admiration of her colleagues and of each of the staff members she works with. She believes that her students will be successful, and they are. Perhaps the best way to describe Mrs. O'Kelley is to simply say that she is a teacher that I would love for my children and future grandchildren to have."

Now in just her seventh year teaching – all at the same school in the Edenton-Chowan district – O’Kelley has earned a reputation as a dedicated and seasoned teacher who acts on her belief that all students can learn, said Principal Steve Wood.

O’Kelley began her teaching career at John A. Holmes High in 2013 after earning bachelor of science degrees in science education and biology and a bachelor of arts degree in chemistry from East Carolina University. Four years later, she was named teacher of the year for the high school in 2017-18.

“She has the natural ability to build trusting relationships and build a culture of high expectations where all students achieve,” Wood said in his letter of recommendation for recognition. “Through the hooks, activities and differentiated strategies, she makes all of her science courses exciting – motivating students to pursue more than they imagined possible. I believe these are innate traits.”

Wood noted that students in O’Kelley’s classes consistently exceed growth expectations on state accountability measures, an achievement he attributes to her hours of dedication in ensuring her lessons are rigorous and align with state standards.

“Although early in her career, she exhibits the qualities that take most a full career to achieve,” Wood said.

Milken Educators are selected in early to mid-career for what they have achieved and for the promise of what they will accomplish. In addition to the $25,000 prize and public recognition, the honor includes membership in the National Milken Educator Network, a group of more than 2,800 top teachers, principals and specialists dedicated to strengthening education.

The awards alternate yearly between elementary and secondary educators. Unlike most teacher recognition programs, the Milken Educator Award is unique: educators cannot apply for this recognition and do not even know they are under consideration. Candidates are sourced through a confidential selection process and then are reviewed by blue-ribbon panels appointed by state departments of education. Those most exceptional are recommended for the award with final selection made by the Milken Family Foundation.

Since joining the Milken Educator Awards program in 1994, 51 North Carolina educators have received the $25,000 award. Nationally, more than 2,700 K–12 teachers, principals and specialists have been named Milken recipients. New recipients are invited to join the Milken Educator Network, a group of distinguished educators whose expertise serves as a valuable resource to fellow educators, legislators, school boards and others shaping the future of education.

More information about O'Kelley, plus links to photos and a video from today’s assembly, can be found on the Milken Educator Awards website at www.milkeneducatorawards.org/educators/view/Rachel-O'Kelley .

For additional information, visit the Milken Educator Awards’ website or call the Milken Family Foundation at 310-570-4772.