A new initiative aimed at attracting more girls to computer science classes was launched today at a Hoke County middle school, where fifth, eighth and 12th grade female students from across the district were encouraged by education and technology leaders to enter a field where women remain outnumbered by men. 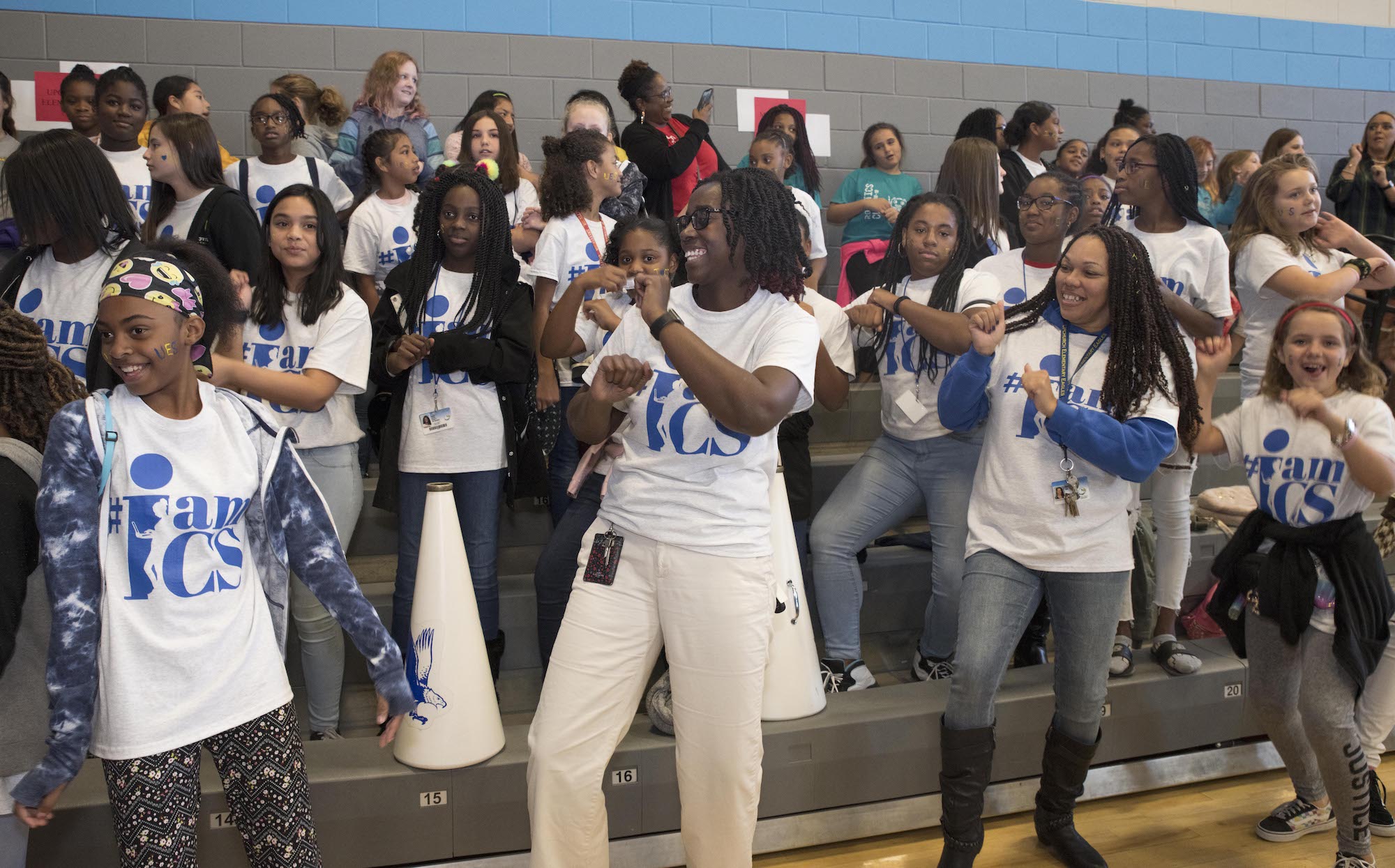 With its own hashtag - #IAmCS - the statewide effort is focused on correcting that imbalance by showing girls and young women in North Carolina schools that computer science is a career that is achievable, rewarding and in high demand. The campaign is led by Mary Hemphill, director of Computer Science &Technology Education for the N.C. Department of Public Instruction, and includes nine women "ambassadors" representing a diversity of computer science careers across the state.

"We are excited to bring these women in computer science to the forefront of what we are going to be doing," Hemphill told the N.C. State Board of Education this summer. "This campaign will move the needle in North Carolina when it comes to the staggering gender and equity gap for North Carolina students in the computer science ecosystem."

Several members of the #IAmCS ambassadors group challenged the students at today's event at Sandy Grove Middle School in Lumber Bridge to dream big and pursue careers in computer science.

"This is your future – take a leap, find your voice and see if you can become computer science," said Mariah Morris, 2019 Burroughs Wellcome Fund Teacher of the Year.

Lisa Smith, software development engineering manager with Spreedly and one of the campaign's nine members, urged the students at today's event to aim high and seek meaningful careers in technology.

"My request to you is to start now and then come help me to solve the problems of the world," Smith told them.

State Superintendent Mark Johnson praised the effort and today's launch of the campaign to get more students engaged in computer science classes and future careers in the field.

"North Carolina has some 20,000 unfilled computing jobs with an estimated $1.5 billion in potential yearly salaries," Johnson said. "We need to do all we can to ensure that our students have the opportunities to get the skills to fill these jobs and create the workforce to attract and retain this key industry in the state."

In her comments to the State Board of Education, Hemphill stressed the importance of ensuring that North Carolina students know about the wealth of opportunities in computer science available in the state.

"What we know is if we don't show North Carolina students what is possible in North Carolina, we are both going to create tangible college and career pathways for them," Hemphill said. "Students have to see it in order to be it. We cannot show them images of Silicon Valley or New York or Colorado Springs. Let's show them the great things that are already happening in realistic and tangible ways. We also want to show them women across North Carolina who are representing a diversity by industry – not just coding, but also cyber security, information technology, analytics and big data."

A recent report from the group Girls Who Code, Hemphill said, showed that states with policies aimed at increasing the availability of computer science classes and instruction haven't seen increased participating by girls. In North Carolina, she said, girls represent only about 30 percent of computer science enrollments.

The campaign is aimed not only at students, but also at technology businesses in North Carolina that can help provide opportunities to support and expose students to technology careers, through internships, scholarships and immersive, on-site activities.

Among technology representatives who attended today's #IAmCS launch were software engineers with Microsoft, which has partnered with #IAmCS to continue growing engagement and generate new possibilities for young women in North Carolina. Microsoft announced that it will open its Raleigh campus to host students for visits to see Microsoft's computer science engineers in their day-to-day jobs.

An eighth grader from West Hoke Middle School was awarded a $1,900 scholarship to the N.C. School of Science and Math's accelerated summer program.

Hoke County was chosen to host today's campaign launch because of the district's innovative instructional programming in technology and computer science. Educators from the district attended the Global CS Education Conference last month in Las Vegas.