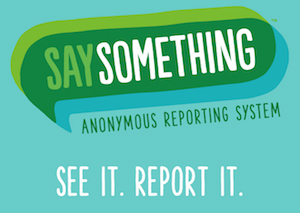 NC State Superintendent Mark Johnson announced today that the state education agency has contracted with Sandy Hook Promise (SHP) to provide a statewide Say Something Anonymous Reporting System in the 2019-20 school year. The Say Something program, including an anonymous mobile tip app, is a school safety program designed to change and save lives by teaching students, educators, and administrators how to recognize the signs and signals of those who may be at risk of hurting themselves or others and to anonymously report this information through the mobile tip app, the website or the telephone crisis hotline.

"Students play a critical role in helping to keep schools safe," Johnson said. "They may see and hear concerns that adults need to know about but may be reluctant to report it. With the Say Something program, middle and high school students will better understand what warning signs to look for and when and how to report important tips through an app. Making this app available will be an important part of our efforts to make schools safer." "We are proud and eager to work with the North Carolina Department of Public Instruction to train students across the state to 'know the signs' of potential violence and report them to a trusted adult via the Say Something Anonymous Reporting System," said Nicole Hockley, co-founder and managing director of Sandy Hook Promise, and mother of Dylan, who was killed in the Sandy Hook Elementary School tragedy. "With these comprehensive violence prevention systems in place, North Carolina schools will be safer, protecting millions of lives and empowering youth to be upstanders in their communities."

Through the Say Something program, students, parents, educators and others can download the app and share school safety concerns with school administrators and school resource officers at schools, who will respond appropriately. More than 5,100 schools nationwide are currently using Sandy Hook Promise's anonymous reporting system. North Carolina will be the second statewide partnership for Sandy Hook Promise, with implementation of an anonymous reporting system that will encourage student participation in protecting themselves and their peers. (Pennsylvania began using the anonymous reporting platform in January.)

The North Carolina Center for Safer Schools, part of the Department of Public Instruction, piloted an app in five school districts in 2015 and 2016. In that pilot, the center received tips related to bullying (39 percent), danger (25 percent), drugs (24 percent), weapons (5 percent), fighting (5 percent); and underage drinking (2 percent). In 2018, the North Carolina General Assembly included development of a statewide app in the 2018-19 budget bill. Tips can be sent in via web, a phone hotline, or through the app – including photos and videos. A crisis center staffed 24/7 by trained counselors will triage, categorize and deliver tip information. Tips will be categorized as either "life safety" or "non-life safety" based on the incident and information the school-based teams provide. The Crisis Center will notify school-based representatives after hours when tips are life threatening and, in cases of imminent threat, contact local 911 dispatch. Johnson said he believes that Sandy Hook Promise's strong emphasis on training is key to a successful program. Say Something trains students, teachers and school administrators how to recognize warning signs and signals of individuals who may be a threat to themselves or others and to "say something" to a trusted adult or use the anonymous reporting system.

Training will be provided not only for educators, but also for law enforcement agencies. The Sandy Hook Promise team and a DPI School Safety Team will be reaching out to school leadership over the next several weeks to provide information about implementation and training. Learn more about the Say Something Anonymous Reporting System at this link.

About Sandy Hook Promise: Sandy Hook Promise (SHP) is a national nonprofit organization based in Newtown, Conn., and led by several family members whose loved ones were killed in the tragic mass shooting at Sandy Hook Elementary School on Dec. 14, 2012.  SHP's mission is to prevent gun violence (and other forms of violence and victimization) BEFORE it can happen by educating and mobilizing youth and adults to identify, intervene and get help for at-risk individuals. SHP is a moderate, above-the-politics organization that supports sensible program and policy solutions that address the "human side" of gun violence by preventing individuals from ever getting to the point of picking up a firearm to hurt themselves or others. The organization's words, actions and impact nationwide are intended to honor all victims of gun violence by turning the Sandy Hook tragedy into a moment of transformation. For more information, www.sandyhookpromise.org or call 203.304.9780.