Governor's School Enlivens Learning for Students from Across North Carolina

This summer, 670 of North Carolina’s most academically gifted and creative rising high school juniors and seniors are exploring cutting-edge ideas and concepts in academics and the arts as part of the 2018 session of the North Carolina Governor’s School. The 2018 session started June 17 and continues until July 25. 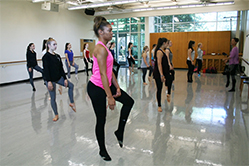 State Superintendent Mark Johnson said that Governor’s School provides a great opportunity for students across North Carolina to pursue their passion for learning alongside other highly motivated students.

“Governor’s School offers some of our brightest students a place where they’re challenged and exposed to new ideas, new friends and new experiences,” Johnson said.

Local school superintendents, along with directors of charter and private schools initially nominate students to attend Governor’s School. The program is open to rising seniors only with exceptions made to include rising juniors in selected performing arts areas.

Faculty and staff of the Governor’s School include distinguished teachers and professionals from public and private schools, colleges and universities across the country. Others are independent artists and scholars. To further enrich the students’ experience, many faculty members are in residence on campus as well.

Gov. Terry Sanford founded the Governor’s School of North Carolina in 1963. The program, which does not involve credit, tests or grades, is the oldest statewide summer residential program for intellectually gifted high school students in the nation.

Questions can be directed to ncgovschool@dpi.nc.gov.