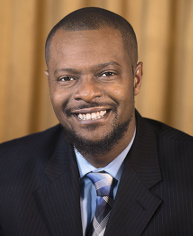 Wallace credited teachers and students for the success at both schools.

"I attribute these successes to my belief in my teachers' instructional abilities and the students' motivation to overcome any faulty perception placed upon them by non-believers," Wallace said in the portfolio he submitted for the award. "The overall driving force was the belief in my students' ability to overcome and meet the challenge to outperform their affluent counterparts when no one believed they could do it."

State Superintendent Mark Johnson commended all eight regional finalists for stand-out leadership in their schools and districts and offered his congratulations to Wallace for his selection as the state's principal of the year.

"These are school leaders who exemplify the kind of leadership that combines a formidable array of skills, knowledge and instincts needed to inspire, guide and support everyone with a role in school," Johnson said. "We're lucky to have them as role models for North Carolina's principals, teachers and students."

Juan Austin, senior vice president for community relations at Wells Fargo, said the progress students have made in the schools where Wallace has been principal is the best indication of his strengths as an educational leader.

"Wallace's leadership, focus and determination have been key to his success as a principal," Austin said. "He has a special ability to recruit and retain quality teachers in his school, and student achievement is remarkable. He will make an excellent ambassador for public education in our state."

Wallace grew up in a poor neighborhood in New Bern, he says in his biographical sketch, graduating from New Bern High School and earning a full athletic scholarship at East Carolina University as a walk-on member of the Pirates football team. After earning a bachelor's degree in rehabilitation services and playing professional football, he was hired as a lateral-entry math teacher at New Bern High and was offered an assistant principal position at Tucker Creek Middle School four years later.

Wallace earned masters degrees in school administration, school counseling and rehabilitation services, all from East Carolina University, where he is now a doctoral candidate in education.

During his two years at H.J. MacDonald Middle, the school made gains in student performance and topped overall average proficiency rates for the district and state for the 2016-17 school year. The school exceeded growth expectations under the state's annual accountability measures in each of his two years leading the school. Wallace noted that the gains followed redistricting for the school that increased the proportion of students receiving free and reduced-price lunch from 19 percent to 64 percent.

"Some thought this was an unattainable request due to the new socioeconomic status and the perceived challenges of the new student population," Wallace wrote to the selection committee.

The other regional Principal of the Year finalists for 2018 were:

Regional winners will each receive $1,000 for personal use and $1,000 for their schools.

While continuing to lead his school for the next year, Wells Fargo will furnish him with a stipend to travel across the state serving as an ambassador for education. He will serve as an advisor to the State Board of Education and also to the board of directors for the NC Public School Forum. He will also compete for national recognition through the NC Principals and Assistant Principals Association and will serve on the 2019 Wells Fargo North Carolina Principal of the Year Selection Committee.