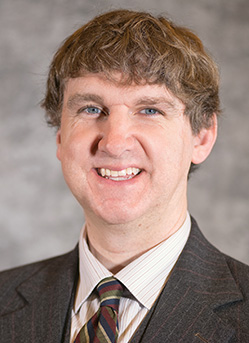 Freebird McKinney, a social studies teacher at Walter M. Williams High School in Burlington, was named the 2018 Burroughs Wellcome Fund North Carolina Teacher of the Year during an awards luncheon today in Cary. McKinney was selected from a field of nine finalists representing the state’s eight education districts and charter schools.

McKinney has been teaching for 13 years, the last three at Williams High School, in the Alamance-Burlington School System, where he teaches World and European history and also is co-coordinator of the school’s International Baccalaureate Pathway Program.

A self-described “village teacher,” McKinney also sees his role as an educator reaching beyond the classroom, leading international service-learning adventures, working also as an adjunct professor at Elon University and serving as a community leader.

“I try to emulate to my students and to community members what an engaged citizen looks like,” McKinney said in his Teacher of the Year nomination submission.

State Superintendent Mark Johnson, who announced the winner today, congratulated McKinney on what he said was a well-deserved honor.

“The state of North Carolina is lucky to have Mr. McKinney and all of his hard-working colleagues who strive to provide all students with the opportunity to work hard and succeed,” Johnson said.

Bill Harrison, superintendent of Alamance-Burlington schools and the former chairman of the State Board of Education, said in a letter supporting McKinney’s nomination that during visits to his classroom, “I always stay longer than my schedule permits because it is tough to leave. … His students are not passive participants. They are actively engaged. Freebird is a true teacher leader and the type of teacher we would all want for our own children.”

As 2018 Teacher of the Year, McKinney succeeds last year’s recipient, Lisa Godwin, a kindergarten teacher at Dixon Elementary School in Onslow County. The teacher of the year is chosen by a committee of professional educators as well business and community leaders. The state selection committee members are chosen based on their active public record in support of education.

Alfred Mays, program officer for science education and diversity with the Burroughs Wellcome Fund, said the foundation is proud to support an award program that recognizes educators who exemplify great teaching and leadership.

“All nine finalists are representatives of the very best in their regions and are the teacher leaders who are not only being recognized for their hard work and contributions,” Mays said, “but also their acceptance of even greater responsibility in promoting the profession that makes all other professions possible.”

He began his teaching career in 2004 at Eastern Guilford High School. During his four years there, he developed a curriculum called “freshmen humanities,” served as social studies department head, varsity cross country and track coach, junior varsity basketball coach and founded a travel club, for which he led a trip to London, Paris and Rome.

From 2008 to 2015, McKinney taught at Grimsley High School in Greensboro, where he was chairman of the social studies department and taught IB Philosophy and AP European History, among other courses, and was teacher sponsor of a number of student groups, including Dustin’s Greenhouse, a service-learning club focusing on grass-roots awareness and service, and the Model United Nations program.

During the last three years at Williams High School in Alamance-Burlington, McKinney has taught AP European History, AP World History and honors World History, among other courses, and with other faculty members is developing an IB Diploma program at the school beginning next school year as the district’s first such program. He developed a Student Leadership Academy at the school to better connect his students and help them become more civically engaged. He’s also a cooperating teacher with Elon University’s School of Education, where he began this year as an adjunct professor, teaching 21st Century Teaching and Learning.

“I am constantly trying to bring new programs, opportunities and experiences to my students,” McKinney wrote to the nominating committee. “I never want them to stop being curious, to stop yearning to discover, and to stop learning.”

As with other regional finalists, McKinney was first recognized this school year as teacher of the year at his school and district.

As Burroughs Wellcome Fund North Carolina Teacher of the Year, he will spend the next school year traveling the state as an ambassador for the teaching profession. He will receive the use during the year of a new vehicle, leased from Flow Automotive, LLC, the opportunity to attend a seminar at the NC Center for the Advancement of Teaching (NCCAT), a mobile device from Lenovo valued at approximately $1,600, an engraved vase, a one-time cash award of $7,500, a trip to the National Teacher of the Year Conference and International Space Camp, and the opportunity to travel abroad through an endowment sponsored by Go Global NC.

McKinney also will serve as an advisor to the State Board of Education for two years and as a board member for the NC Public School Forum for one year. In addition, the North Carolina Department of Public Instruction will sponsor his enrollment and completion of the Public School Forum’s Education Policy Fellowship Program.

The other regional finalists were: